This project is a joint research project within the European Metrology Research Program EMPIR. The major goals and objectives of the project are given in the downloadable Publishable Summary. A brief outline is given below.

So far, the project has attracted significiant interest from metrological organisations, academia and industry world-wide. A significant highlight is the promotion of SI units for digital communication of metrological data at the International Committee for Weights and Measures (CIPM) whose stakeholders are international standardisation bodies like ISO, IEC and legal metrology organisations like OIML. The promotion by PTB lead to the foundation of the CIPM Task Group “Digital-SI” which is pursuing the future harmonisation of SI units in digital applications.

First versions of the DCCs based on the SmartCom definitions are being prepared and tested by the project partners and at PTB by project GemiMeG. The project GemiMeG deals partly with secure and robust calibrated measurement systems for the digital transfer of information and focuses also on the secure distribution and usage of obtained data. Thus, the main link between GemiMeG and SmartCom will be the development of digital calibration certificates based on the SmartCom definitions.

Impact on industrial and other user communities

The most important impact so far is that SmartCom has initiated a worldwide discussion on how metrological information can be communicated in future IoT networks and these discussions are expected to intensify over the remaining life-time of the project.

The SmartCom concept of a uniform and globally available communication protocol is of great interest for industry and calibration services. The project was asked to present the ideas to relevant communities around the world. For example, presentations were held at the APMP conference in Singapore 2018 (a podium discussion), at the international metrology conference and fair CIM in Paris 2019 and at the MatMap 2019 conference (UK). The European weighing industry also invited SmartCom to their annual meeting in 2018 to get information on how to benefit from project results.

In addition, PTB was invited to disseminate the SmartCom concepts and results at strategic meetings of the German Mechanical Engineering Industry Association (VDMA) and the Association of German Engineers (VDI), where the DCC has been identified as an essential part of future metrological infrastructures.

Furthermore, the cooperation between SmartCom and the German project GemiMeG is very promising. GemiMeG is trying to establish a technical infrastructure, supporting software and application examples in the field of digital calibration certification for German industry. SmartCom is involved in discussions with industry, calibration labs and German accreditation body DAkkS. A GemiMeG-workshop addressing the needs of German industry was held in June 2019, where SmartCom was closely involved. In November 2019 a stakeholder workshop was organised at NPL where the need for SmartCom’s results was clearly expressed by stakeholders.

Impact on the metrology and scientific communities

The project will enable new services based on mobile communication devices. Electronic-documentation, quality management and assurance will be supported and facilitated. Automatic processing and provision of DCC will be possible as well as automatic reading of calibration values. The project will also support the future new services based on mobile communication devices. The activities of this project will enable NMIs to take a leading role in providing quality assured metrology information to support a well-engineered Industry 4.0 and IoT ecosystem.

In addition to the promotion at CIPM, the project ideas have been presented to regional metrology organisations such as Euro-asian cooperation of national metrological institutions (COOMET), Inter-American Metrology System (SIM) and Asia Pacific Metrology Programme (APMP). The EMPIR Technical Committee IM 1448 “Development of digital calibration certificates“ is being coordinated by SmartCom representatives. Outcomes of the project are also being exploited in national German communities for digitalisation in Research Data Management (NFDI4phys & NFDI4ing).

A close cooperation with the EMPIR project 17IND12 Metrology for the factory of the future (Met4FoF) – has resulted in defining joint demonstrators – one regarding the use of the OPC UA communication standard and one to demonstrate the use in MEMS testing. This work will be continued and finalised in the second half of the projects.

The results of the project can be added to any standard in metrology dealing with certification or exchange of metrological data. The representatives of the consortium are active members in national and international standardisation bodies and committees and have fundamental knowledge in IT and IT‑infrastructure. This expertise enables the formulation of end-user friendly interfaces considering the essential context of the SI system and related standards and regulations. The framework of the project will be presented to a broad group of experts at an early stage of the project to enable them to design their software interfaces according to the IoT guidelines defined in this project.

Through connection with the CIPM Task Group on the Digital SI, the related SmartCom results will be installed at the highest level of metrology and will become mandatory for metrological standardisation. In addition, the SmartCom project has been presented to the Open Platform Communications United Architecture OPC-UA working group and to the Director of Technology of the OPC foundation, and German platform industry 4.0.

A significant economic benefit for all future markets involved in IoT will be realised by the adoption of uniform communication specifications, as developed by this project. This will result in shorter timespans from product to market, reduced downtimes, fewer rejected parts, improvements in quality control, better organised maintenance, better conservation of energy and resources and better business.

Another major impact of the project will be that organisations will be able to exchange measurement information digitally, safe in the knowledge that all necessary metadata relating to units and uncertainties have also been exchanged using validated protocols. The benefit of this unambiguous communication of metrological data will be the elimination of financial and societal risks resulting from the misinterpretation of data.

Impact is also expected in the health-sector where a project will be launched in Germany in 2020 working on a secure exchange of medical measurement data between smart devices and emergency-services (ISAN). The outputs of the SmartCom project in combination with national developments from the GemiMeG project are important enablers of the ISAN project.

TraCIM D-SI test system is currently being revised and will not be available again until 2023.

The SmartCom project ended in September 2021

This project is a joint research...

SmartCom will participate in a Series of online sessions called " Metrology for Digital Transformation" hosted by EURAMET.

This short presentation describes the purpose of digital Calibration Certificates in general and gives an overview of the technical content of the PTB... 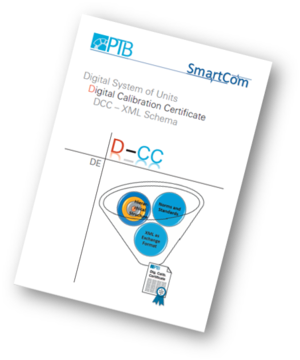 The basic concept of a universal and flexible structure for digital calibration certificates (DCCs) has been developed and established. 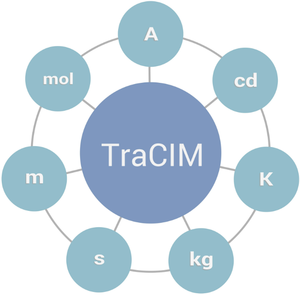 The SmartCom project has developed two novel modules for the validation of SI-based data formats and digital calibration certificates. 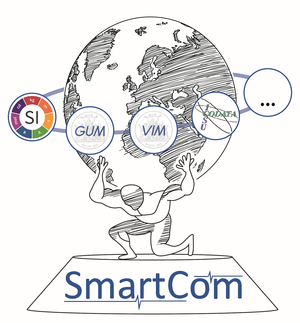 Suggestions for the realization of digital calibration certificates (DCCs) published

A document specifying the design principles for DCCs “Document describing a universal and flexible structure for digital calibration certificates...

Deliverable D5 > For the validation of the D-SI data format and the DCC structure SmartCom has integrated two novel validation modules into an online... 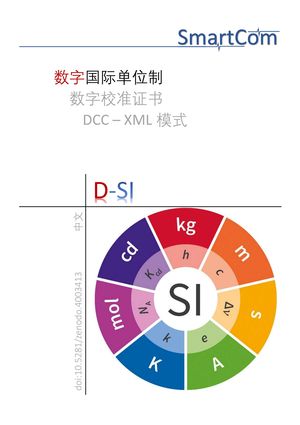 The D-SI brochure, the guide for the use of the metadata format for the digital transfer of metrological data, has been translated into Chinese

A guide has been developed, specifying the rules for the secure use of DCC. while covering legal aspects of metrology.